Then, the iron ore price has risen sharply within half a year, what impact will it have on domestic related companies?

In addition to traders stepping up to inventory, steel companies are also stepping up shipments. The person in charge of a steel company in Hebei told the reporter that at present, the sales profit of downstream finished products has actually not kept up with the increase in raw material prices, but if it does not increase the strength of the warehouse, it is likely to suffer losses.

In the interview, the reporter learned that at the beginning of this year, the steel mill’s profit per ton of steel was mostly maintained at around 700 yuan, but it has already dropped below 200 yuan. Some steel mills’ profits have even dropped to zero point.

In the case of tight supply, the demand of domestic steel companies has not decreased. According to the National Bureau of Statistics, in May, the national production of pig iron and crude steel were 72.19 million tons and 89.09 million tons, respectively, up 6.6% and 10% year-on-year.

The tight supply and demand situation of iron ore has further pushed up the rise in futures prices. As of the close of the night of July 26, 2019, the main contract price of the iron ore futures of Dashang was closed at 887.5 yuan per ton, which was nearly 80% higher than the price of 500 yuan per ton in January this year.

However, industry insiders said that although the enthusiasm for iron ore in the futures market has been relatively high in the past six months, from the operational indicators, there is no overheating.

On Monday, the world’s largest iron ore supplier, Brazil’s Vale, restored 30 million tons of capacity. As overseas mines resume production, supply shortages will ease. However, for the steel industry, how to deal with the risks brought by rising raw materials?

According to industry insiders, from the perspective of the raw material industry chain, coking coal, coke, iron ore, and rebar have corresponding futures contracts. Enterprises should use the futures market reasonably to hedge the risks brought about by price fluctuations. In addition, what the steel industry needs to do is to increase industrial concentration and reduce dependence on imported raw materials. 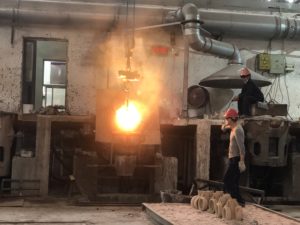